How have I come to the faith of believing in angels?

Have I ever seen angels? I would say not in the form of beautiful human with wings and a light aura we imagine the angels would be. Intransitively, however in many other forms and ways of sending their love and protection, I have experienced many “so call” coincident and miraculous events in my life looking back long before I was even being made aware of the angles existence. Unexpected rescues that came when I ran out of resources, times of despair, when the roads were blocks, hope disappeared. The universe sent me help and guidance, through the angels channel. I hear their whispers and I see miracles. Angels are seen through the heart!, intuitive bliss of the knowing called faith.

The dark night of the soul

A major soul awakening event occurred to me in 2015, right after a soul aching divorce with my beloved ex husband, I wished for a happy love life with my boyfriend, the man who is home to my soul, would come true. He and I had been deeply in love on a long distance relationship for some time.

As I had made my way to his front door waiting for him to come take my hand and walk me inside. And there I was.. like this song "just when I thought the chance has passed, you went and save the best for last". I was told he actually wasn’t sure what he wanted and that he needed space and time for clarity to see what he wanted in his life. I never saw that coming. The very same wound in my heart got cut opened once again, twice deeper this time. How could I survive another day when the only light I had been holding on to all these years suddenly got taken away, that light was my soul. Every waking conscious moment was endless pain.

Passing time of despair, I turned to the teaching of the Buddha (my birth religion) for healing and comfort. I started to pray and meditate which helped me spiritually. Although I was born and raised Buddhist I had never truly acquired knowledge of the teaching of the lord Buddha as real and as deep as this time. It’s in the darkest night that we see the brightest stars.​ While practicing meditation reflecting thoughts and feelings on the teaching of the Buddha I gained spiritual wisdom. It had opened me up to the gate of cosmos. I started to tune in with the knowledge of the universe and spiritual teaching regardless of religious beliefs, interested in and opened to all philosophies that I could resonate. My perception shifted, I began to see the world from a whole new level of perspective and understanding.

As the Law of Attraction says “like attracts like”, I was guided by the universe to listen to the inner voice that speaks to me. Having consciously gone within to reflect everything that had happened to my life, becoming aware of the substance of the mind I found a healing resource and regained the strength to carry on with my work and other practical responsibilities in life. December 2015, when he confessed to me he still wasn’t sure what he wanted after he had already told me a month earlier he wanted us to be together but only said so because he cared for my feelings. I realized then that the pain was greater to be the source of his unhappiness myself for holding him back from the dreams he truly wanted. I shall love him unconditionally by setting him free and be happy for his choice. I told him then that it was okay to let go. This was the first time the universe taught me unconditional love.

Receiving messages from the angels

Twin flames running I suspect, turned out it was probably only meant to happen to give me a soul awakening lesson. He did not let go instead expressed intention to move our relationship forward. We started to proceed with the resident papers while we were living half of the world apart however I could sense that he still had some doubts, I could just felt it in my heart. From January 2016 I prayed that he found faith in our love and may all fears fade away. I asked that God, the universe or whoever up there was watching over would give us strength to remain in faith no matter how our illusion of fears might present itself. This was when I began to receive the inner voice that I don’t know how I know but I know that it’s the angles that were communicating with me. I started to see repeating patterns of number sequences such as 11:11, 333, 999 etc and when I looked up at the angels number interpretation I received messages they wanted to tell me at the time. I often would see one numbers such as 999 and wouldn’t believe it was the angels so I asked for a confirmation and suddenly the same numbers showed up again before my eyes.

One time I asked the angles to please tell me whether I would get to be with my love and something told me to look out the window, I saw a tree standing in the “Y” sh​ape I knew this was their message to me. May 2016, I found his note writing he was reconsidering his decision, I could barely felt my heartbeats. I wish he would just kill my body too. If you don't want to stay in my life, let me die now then in you arms my love. I drove to the sea and went to a reserved island I was sitting alone in a quiet beach crying aloud to the ocean and the mountain spirits asking for help. I didn’t know what else I could do I simply couldn’t go on. The fear of his rejection was suffocating my soul. I literally cried out “help me, please help me”. After a while I calmed down and walked back up to the shore I was led to look at the rock near the cliff and there I found a “Y” shape dead corals sitting there by itself as if someone had placed it there for me to see. I picked it up and thanked to the angels and the nature spirits for their comfort and the confirmation to my prayer.

On the way back to the mainland in a boat I was getting off but suddenly looked down near the area where the boat engine was placed in a narrow dark corner, I saw a silver round shape shining looking like a ring opener for a can but my intuitive eye told me it was a diamond ring! As my rational thoughts were arguing with my intuition I reached down to pick it up and there it was an engagement ring with a diamond. It was a miracle to me and again when I tried to think how I knew, I don’t know how I did but in my heart I knew I had to look there and it was another message sent to me from the universe by the angels. It’s been a journey of faith for me as I did pray to never let the ego cast a shadow of fear on the light of faith in love. The angels came to show me their love and support. The more I recognized and appreciate their help the more I received.

In February 2016, I had this calling that told me to read tarot cards to help friends around me that I knew were also facing challenges in life so I went to a book store to look for some sort of tarot cards. Without really knowing that angels card decks do exist I found a deck of angels oracle cards so I brought them home. I read the instructions on how to use and read the cards, after a peaceful meditation I asked the angels why was I led to have this card decks in my hands. I picked a card and it was “Application” which interprets that I have been on a quest for greater understanding and knowledge for some time now. The time has truly come to apply this acquired knowledge in a practical way in my real life, demonstrate to myself and those around me what I have learnt.

Since then, in addition to prayer, yoga and meditation, I have also been using the angels oracle card deck to ask angels for guidance, their messages through the cards have been both resonate and uplifting. Friends and families started to ask for advice from their angles on current life issues. The reading would always surprisingly be resonated, we would feel the connection. Many more friends came to me for angel cards reading to receive divine guidance, they found comfort and gained strength, I saw a shift in their approach and respond to the situation that were challenging them at the time.

This inspired me to continue helping others giving them comfort and have courage to go on in life. Above all whilst I was also facing my own challenge I was healed and uplifted by lifting and healing others. Faith endures miracles, it happens to those who believe.

We have now been reunited, our mission together has begun and so have our lives. Looking back as far through all life struggles, it's been a journey of transformation and realization. I have peeled out layers of ego. I have lost who I was and yet who I thought I truly was to become a completely different person. I learn to flow in the river of life and forgive myself. I have illuminated from the dark night of the soul where everything I believed to be true was shattered right before my eyes and woke up to the truth of who I truly am. Along the dark night, the angels were carrying me under their wings. Call upon your angels for their help and listen to your inner spiritual guidance to hear their whispers. Life is a gift from God and the angels are sent to guide us to complete each one of our mission in this reincarnation. Intuition is our innate ability, through mindfulness practice we seek internally to find our true self and become one with the universe. Life is magic!

How have I come to the faith of believing in angels?

Weekly Angels Guidance: 9-15 Oct 17 🔮 Awakening to the power within.

Weekly Angels Guidance: 2-8 Oct 17 🔮 Dream and live the dreams that are truly YOURS 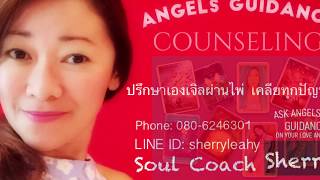 Be your own fortune teller by remembering Self-Power.